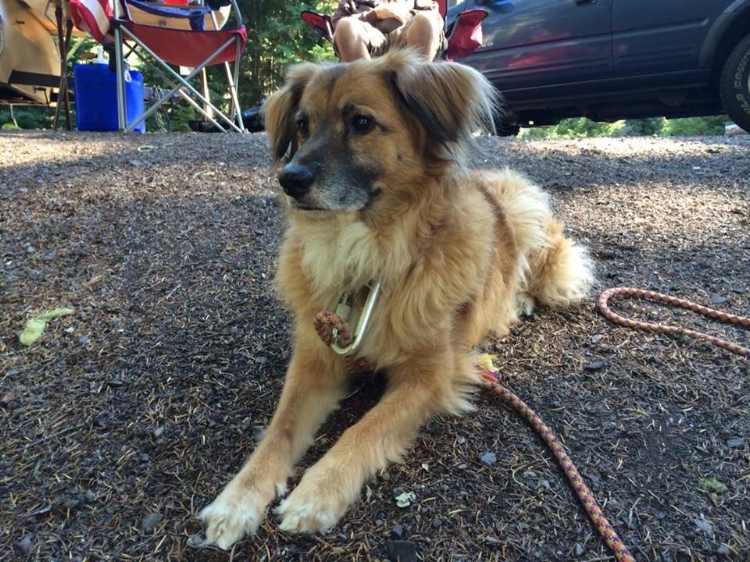 We get lots of interesting reactions when we tell people that our dog travels with us full time. Most people think it’s a very cool idea, but have lots of questions about logistics (like how to choose the best tent for camping with a dog). Other people nearly immediately offer to keep him for us, assuming we are bringing him because we have no choice. Then there are the few individuals who look at us like we’re crazy. Here is an explanation of why our dog travels with us.

The truth is, leaving Indy somewhere while we traveled was never an option. Period. We do leave him for about two weeks a year while we go to Burning Man, but anything more than that has never been on the table at all. 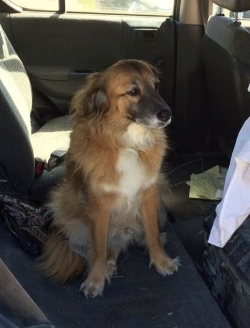 Indy gets so sad when we are packing up to go to Burning Man.

I (Brittany) have had the joy of being Indy’s owner for over 8 years. In those 8 years Indy and I have moved across the country multiple times, been married, divorced, and Indy was by my side when my mother passed away from terminal cancer. Indy plays a huge role in my life, he has given me friendship when I’ve felt lonely, purpose when I’ve felt lost, affection when I’ve felt sad, and so, so, SO much love. In return it is my responsibility to keep him happy, healthy, and safe. I owe him that much considering what a beautiful presence he has been in my life.

At 12 years old Indy is officially a senior dog, he only has so much time left, and I absolutely refuse to spend large amounts of time away from him when our time together is limited. Tom and Indy also have a very strong bond, Indy loved him from the first second they met. In fact, I’ve never seen Indy connect so deeply with anyone besides me. Tom completely understands and agrees that Indy has to come with us on our travels. 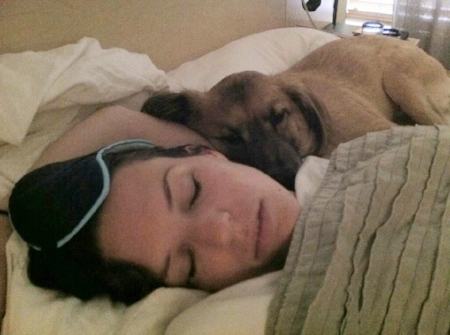 Morning snuggles are an important part of our routine.

Preparing Indy for this trip required a multi-faceted approach. Indy is already well trained and comfortable hanging out with me in public places like restaurants and bars, but I wanted to make sure that he would be comfortable camping and spending all of our time outside. To prepare for that we took him on several camping trips, and tried to make his camping experiences very positive by giving him special treats and freedoms on these trips (playing in rivers, eating small amounts of bbq meat, etc.)

It was also really important that Indy enjoy his bicycle trailer since he will be spending so much time in it. When the trailer first arrived I began the training process by setting it up in the living room (without wheels) and rewarding Indy with a “super treat” (a very high value treat like chicken or hot dog) anytime he approached the trailer. The idea here was to build a positive association with the trailer in Indy’s mind. We incrementally increased Indy’s exposure to the trailer, and it was about two weeks before we ever closed Indy into the trailer for an actual bike ride. Even now, every time Indy loads into the bicycle trailer for a ride he receives a “super treat” reward. Indy loves his bicycle trailer, so much so that he usually doesn’t want to get out when we make stops! 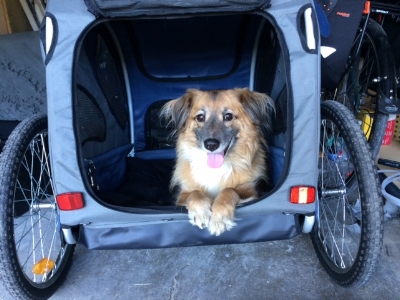 Indy in his trailer

Tom and I are so excited to share this big adventure with our best friend, Indy.

Have you traveled with your dog? Would you like to? Tell us about it in the comments!