In past posts I’ve mentioned that Burning Man has played a major role in our lives. In fact, Tom and I met at Burning Man in 2012. I’m heading into my seventh burn, and it will be Tom’s eleventh!

Not sure if you want to attend Burning Man? We can help! Check out our post: Should I go to Burning Man?

The Burning Man festival (though it really isn’t a festival in the traditional sense), for those who are unfamiliar, is an annual social experiment in the Black Rock Desert of Nevada. 70,000 people come from all over the world to live in a commerce-free society for one week. There are hundreds of beautiful, large scale art installations built and burned within that week.

Preparing for Burning Man can be a daunting task even for the most seasoned veterans. For burgins (Burning Man slang for first time Burning Man attendees) preparation can be very overwhelming. So here we present our giude: How to Prepare for Burning Man. (Also check out my first-hand experience of going to Burning Man alone !)

Burning Man tickets generally go on sale around February, and they sell out fast, usually in less than an hour! So the first step is to sign up for the Burning Man email newsletter, called The Jack Rabbit Speaks. The JRS will announce ticket information and sale dates, along with instructions on how to register for the sales.

Tom and I coordinate a theme camp at Burning Man. Theme camps are Burning Man camps that provide a gift to the community, as Burning Man is an entirely gift-based economy. So around March we put together a placement application that we send to the Burning Man Organization letting them know that we will be returning with our theme camp, and that we would like to have our theme camp placed on the Black Rock City map.

If it is your first year going to Burning Man you do NOT need to join a camp! This is a common misconception! While theme camps can be a lot of fun, many people come to Burning Man as individuals, and do not join theme camps. My first year at Burning Man I went completely solo, and visited Black Rock City with no camp affiliation. It was fantastic!!

If you would like to join or start a Burning Man theme camp, March is a good time to start seriously inquiring with existing camps and/or start putting together a plan for your own camp.

At Burning Man “Radical Inclusion” is an important part of the culture. Radical Inclusion means that everyone is included and welcome. While this may sound like a simple thing, radical inclusion is what makes Burning Man so special for a lot of people. If you wake up and feel like wearing a banana costume with combat boots while you discuss astrophysics with the NASA engineer camped next door that is not only acceptable, but encouraged! If you want to wear a polo shirt, khakis, and loafers while you climb a 30 foot tall art structure in a dust storm that’s great, go for it! Just about any and all legal behavior is accepted in Black Rock City as long as it does not harm anyone around you.

Radical inclusion means that it is REALLY fun to plan Burning Man costumes and camp decorations. I usually try to get the supplies I need for these in May/June so that I have a couple months to work on the things I’m creating. (Need help decorating your burner bike?)

I also order lots of LED blinky toys/jewelry around this time of year. It is very important that everyone is well lit once the sun goes down because there are hundreds of art cars driving through the streets of Burning Man at night, and if you are not well lit they cannot see you!! “Darkwad” is Burning Man slang for someone who is unlit at night- don’t be one!

There is nothing for sale at Black Rock City besides ice and coffee. You are expected to bring all of the water and food you will need to survive for a week in the desert. This requires some planning!

July is the time to complete your Burning Man packing list. It may still require some editing at actual packing time, but you want the main list finished before August.

July is also the month to figure out what you want to eat at Burning Man! I usually create a spreadsheet with my breakfast, lunch, and dinner planned out for each day I will be in Black Rock City. This ensures that I don’t run out of food before the end of the week.

Coolers can be tricky to manage in the desert, so I try to plan as many shelf-stable meals as possible. Some of my go-to foods are cereal with shelf-stable milk boxes, shelf stable Tasty Bites indian food packs, canned chicken, and Pringles….lots of Pringles. None of these are foods I eat in my regular life, but the desert is very dehydrating, and in Black Rock City your body will crave salt in a way you have likely never experienced. Oh! And pickles, do NOT forget to bring pickles!

I begin buying my shelf stable food, as well as camp supplies, two to three weeks before we are scheduled to leave for Burning Man. Packing always takes longer than I expect, so this gives me plenty of time to get everything I need before packing begins.

Buying enough food to last an entire week of desert camping takes some time and some lists! I use the meal planning spreadsheet from earlier in the summer to create my grocery list. Then I add LOTS of liquids to the list. Powerade, cranberry juice, and cold brew coffee are some of my must-have beverages for Burning Man. These beverages are in addition to the 1.5 gallons of water per person per day that you will need for your time in Black Rock City.

At this time I also purchase new parachute cord, ratchet straps, and any other camp supplies we may need.

I pull out my packing list and hit my garage HARD in mid-August. I need to locate every item on my packing list, because I don’t want to realize I’m missing something essential while I’m packing the car to go. I check everything off on the list, and then if anything is missing I know what needs to be replaced.

Pack all the things!! Late August, the day before departure 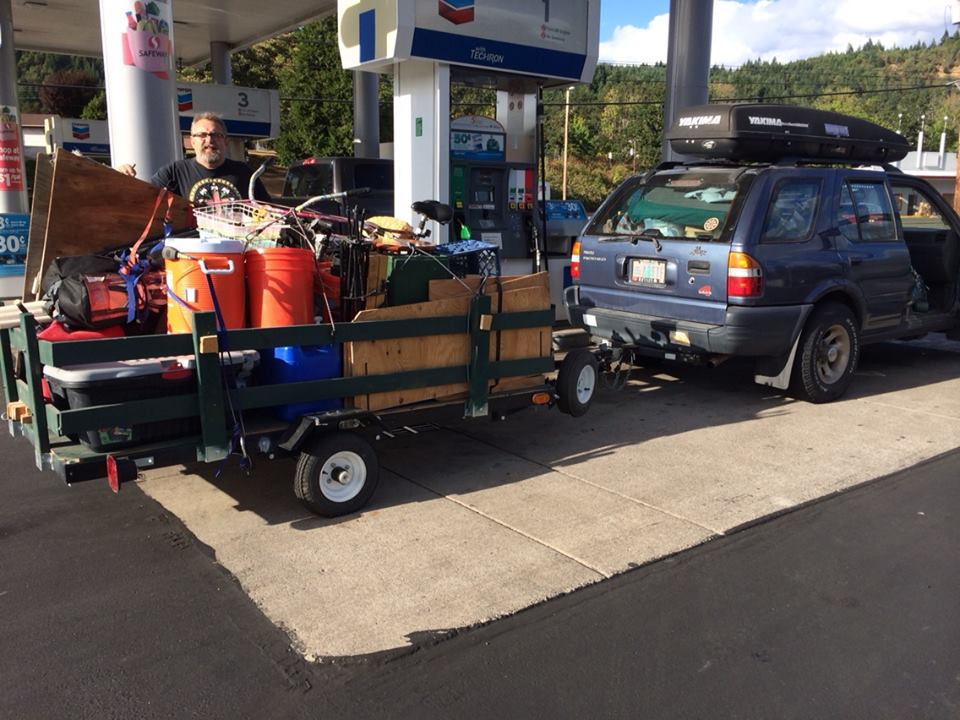 Packing for Burning Man is like playing a life-sized, panic-inducing version of Tetris. You will always have more to pack than you have reasonable space for. Besides the (at least) 11 gallons of water per person that you need there’s tents, monkey huts, bicycles, costumes, camp chairs, and the list just goes on and on and on.

My biggest tip for packing is: do not be afraid to take things out of the car to allow you to re-organize if you need to. Just because something has gone into the car, that does not mean that it can’t come back out if need be.

Take your time, take deep breaths. Packing the car is a great time to start preparing for the big emotions Burning Man will inevitably spark in you. Drink water, not beer, while packing- getting dehydrated will only make the process more stressful. And, most of all, remember…..YOU’RE PACKING FOR BURNING MAN. After all of this preparation and work you are on your way to Black Rock City, Nevada!!!

Need help figuring out that packing list? Not sure which camping gear you need? Check out our roundup of Festival Gear we Can’t Live Without! Or read about my virgin burn- I went alone!

A few more excellent resources to help you plan: 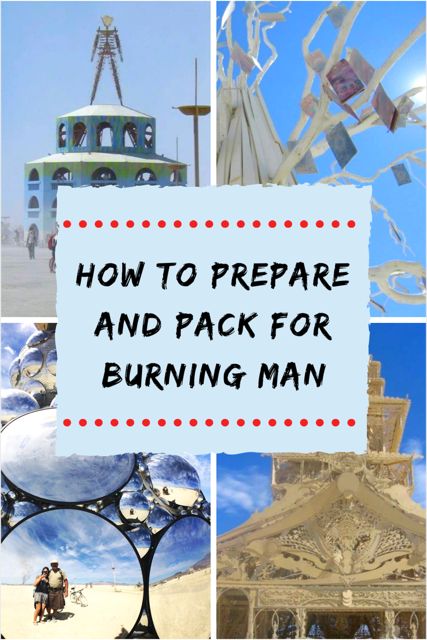 Have you been to Burning Man? What’s your number one tip for first-timers? Leave us a comment below!